INAUGURATION OF THE AI-NURECC DIRECT INFOPOINT IN VASTO 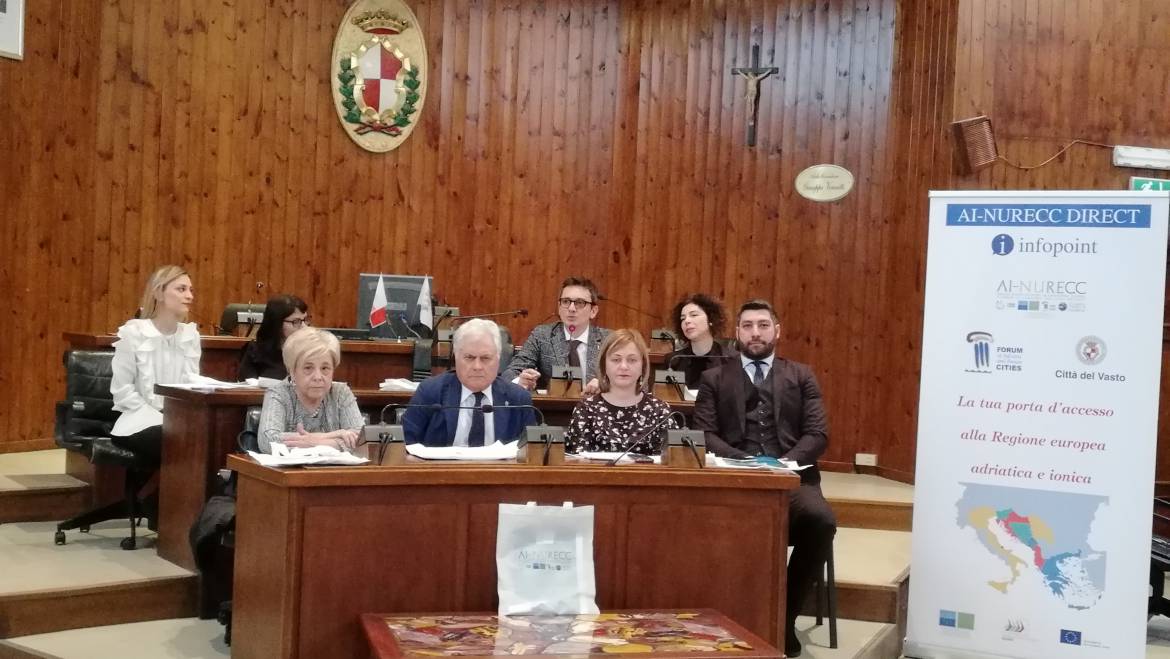 The President of the Forum of the Adriatic and Ionian Cities – FAIC Francesco Menna, proceeded to the formal ribbon cutting together with the Councilor for Community Policies Anna Bosco, the FAIC coordinator Francesco Buoncompagni, Lisa Esposito of the Adriatic-Ionian Euroregion association and Angela Di Francesco responsible for the AI-NURECC Direct Info Point service.

The event was attended by municipal councilors, the press, citizenship, local trade associations such as AssoVasto, Confesercenti, Lkl Onlus, representatives of the schools and universities, as well as the ANCI Regional Abruzzo, thanks to the presence of the President Luciano Lapenna and the Director Massimo Luciani. Unfortunately not being able to participate in the inauguration the Directorate General for the European Union of the Italian Ministry of Foreign Affairs, trough the councilor Andrea Della Nebbia, sent greetings and warm thanks to all the participants.

The President of the FAIC, the Mayor Francesco Menna, underlined the strategic importance of the AI-NURECC Direct Info Point service and drew attention to the aims and values ​​of the cooperation among the cities of the Adriatic-Ionian Macro Region.

The assessor for Community Policies of the city of Vasto Anna Bosco, FAIC delegate, underlined how the office can be an opportunity to develop thematic and project partnerships among the local communities composed by 47 cities belonging to the FAIC, and it could be helpful to consolidate the relations among them. He added that the activity carried out by the manager Angela Di Francesco, will also determine a strengthening of competences in the field of cooperation and cross-border planning of the current President administration, with a widespread added value.

At the and of the ceremony, the FAIC coordinator Francesco Buoncompagni released an interview, underlining that “the AI-NURECC Direct Info Point information office is not only serving City of Vasto but also the local communities throughout the area, bringing together the 47 cities belonging to the FAIC. The office is an example of innovation and experimentation, it is the first thematic information office on the Adriatic Macro Region – Ionian. Through this active promotion tool, Vasto becomes a small capital in this area, joining Ancona, the secretariat headquarter, and aims to be the promoter of a wide strategy vision “.

The AI-NURECC Direct service, explained the office manager Angela Di Francesco: “has already established relationships with other local services, laying the foundations for agreements and synergies with the regional Europe Direct offices, the Regional ANCI and the academic community. On the day of the official inauguration, some demands have already been detected and brought back within the partnership dynamics, the proposition of the FAIC and the project partners of the AI-NURECC Initiative. Through direct contact and sending requests via e-mail, citizenship requested and received information on the project itself as well as on issues about sustainable local development, the enhancement of common cultural routes in the area, the theme of citizenship and the blue economy “. As argued by Angela Di Francesco “the creation of a local network will increase the effectiveness of the carried out job, and it will also purse the sustainability even after the expiry of the project”.